Sanyo Mavic Media, a wholly-owned subsidiary of Sanyo Electronics, has developed the world's first biodegradable compact disc using PLA materials. Its box and packaging are also made from the same material. The new CD-ROM jointly developed by Japan's Mitsubishi Chemical Corporation and Sanyo Mavic Media, with the listing name MildDisc, cannot actually be distinguished from the conventional polycarbonate material disc without affecting the sound and image quality. 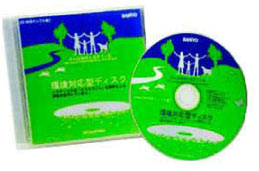 The estimated demand for optical discs around the world is about 100 billion production scales, and the processing of conventional PC discs has increased the global environmental burden. In addition to being biodegradable, MildDisc is derived from renewable resources. Sanyoâ€™s goal is to lock in many customers who produce pre-recorded CDs, such as music CDs, VCDs, or software CD-Rom. Although the beginning is focused on pre-recorded applications, the company is also considering MildDisc products for recordable and rewritable use. The same technology-based DVD is also a possible future goal.